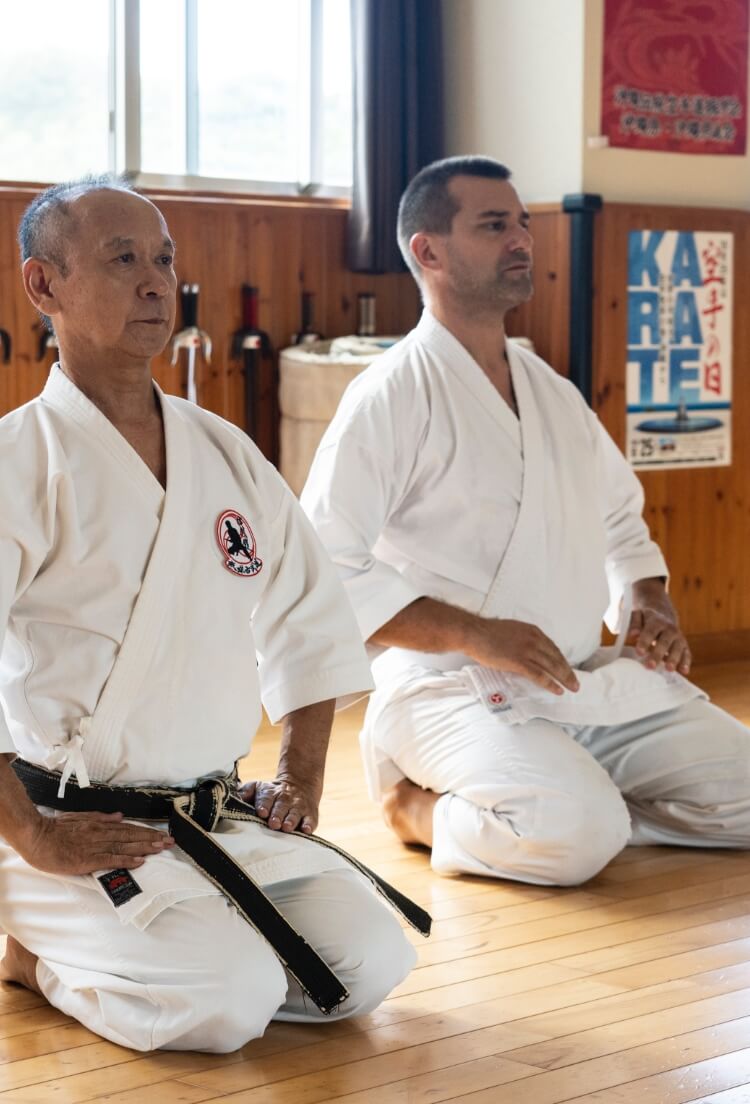 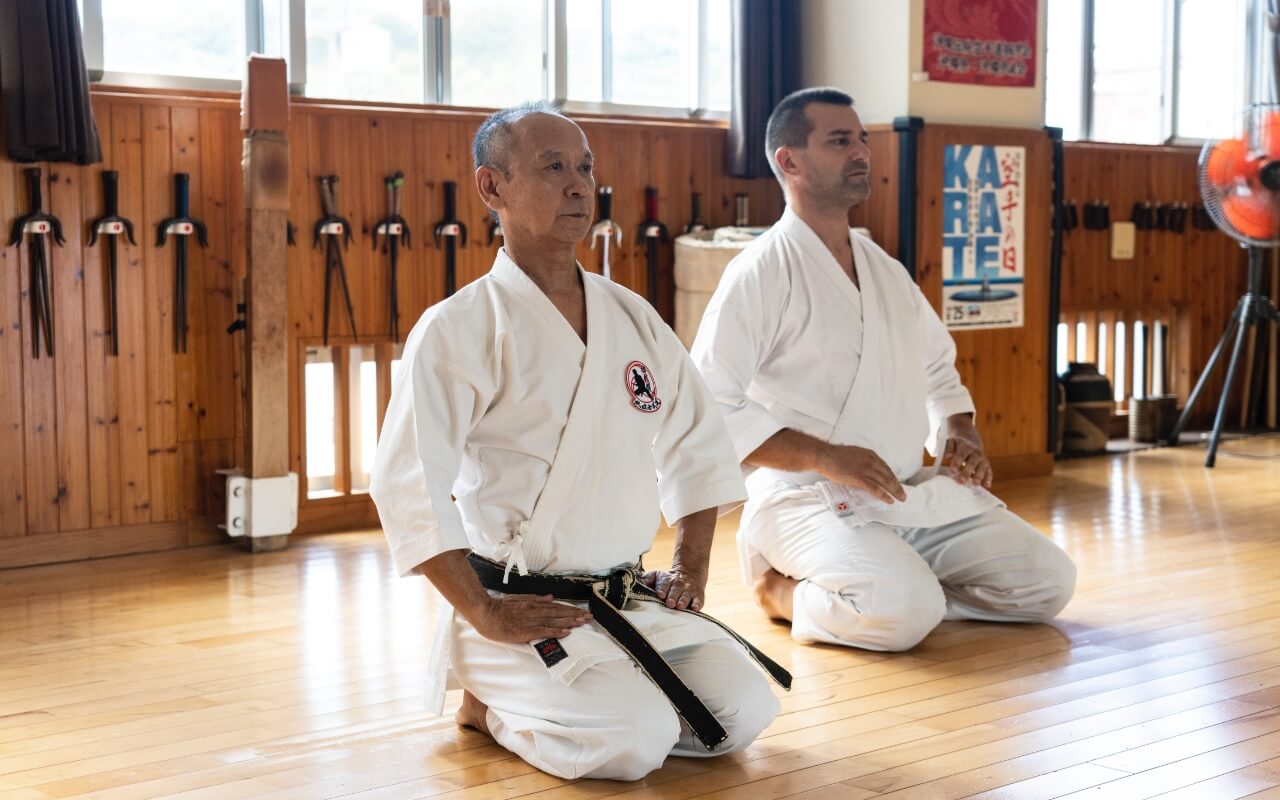 TRADITIONKarate is many things to many people, none of them is wrong, but they all agree on the fundamental objective that karate helps create better people.

A final lunge, a parry, a stamp of the foot, and then it was all over. The two figures composed themselves, crisply bowed, and calm descended over the room. Those unaccustomed to the whirl of weapons and flashing kicks might struggle to keep their fight or flight response in check, but there is no need. This meeting of martial forces is not only safe, but a splendid demonstration of the possibilities for discipline and development to be found within the rich traditions of Okinawan martial arts.

Today’s student, James Pankiewicz has come to Ryukyu Kobudo Shimbukan Dojo for some individual instruction with Akamine Hiroshi Sensei, a Master of Ryukyu kobudo, the art of using weaponry in Okinawan karate. An accomplished karate practitioner himself, James could not have chosen a more esteemed teacher to hone his kobudo skills. Akamine Sensei is a custodian of this martial art tradition and was taught directly by Taira Shinken, a founding figure of the Society for the Promotion and Preservation of Ryukyu Classical Martial Arts.

The array of weapons around the room look intimidating, but Akamine Sensei reminds us of their purpose, “Kobudo is not about wielding weapons, it is about making the body the focus and moving it in unison with weapons.” In this sense, kobudo fits seamlessly with the more widely known forms of karate-do, the name which literally means “way of the empty hand.” Akamine Sensei expands on the deeper significance, “Practicing karate and kobudo is not really about learning a particular technique, it is about developing to the level where the spirit of karate becomes part of you, a life-long resource to help guide you through life and help you to control your emotions and master yourself.” 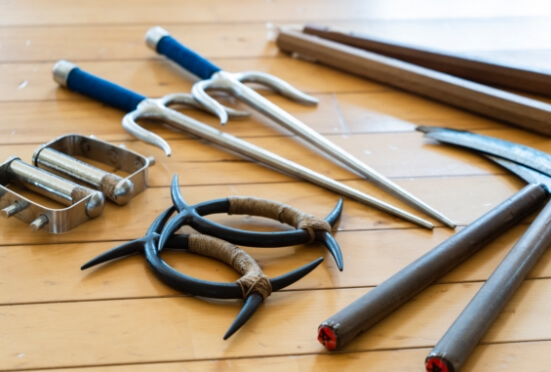 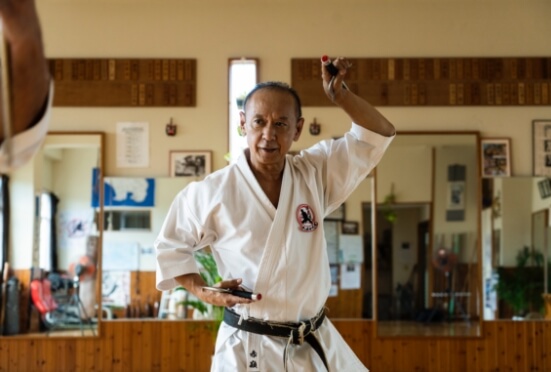 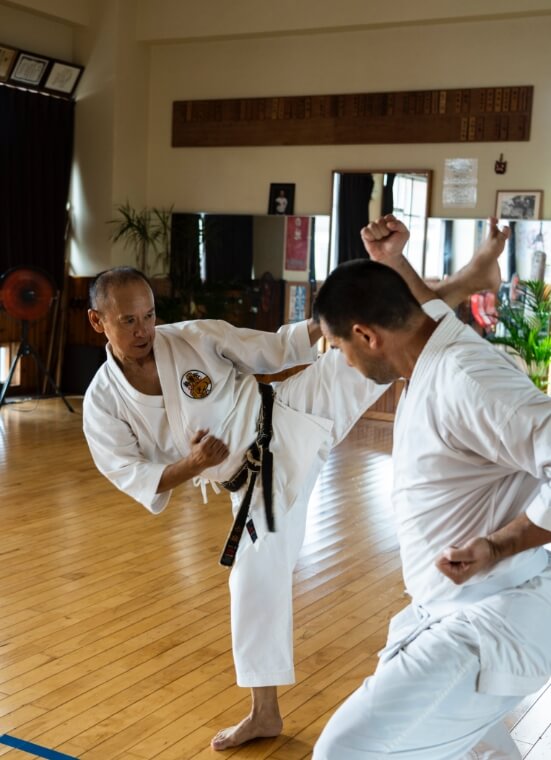 “Karate sets a foundation of discipline, humbleness, and self-awareness that is to a person’s advantage for their whole life.”

Akamine Sensei continues, “Karate and kobudo are a lifelong journey, where you learn a technique and wider practice as a way of making it your own. This is a process, one that can adapt to your capabilities at whatever your stage of life.” James helpfully adds, “Learning kobudo in Okinawa is a great opportunity to access authentic kobudo straight from the source, but in a way that is complementary to your own practice, because the two arts have traditionally been taught together. They are like the left hand and right hand of the greater whole that is Okinawan karate.”

James has touched upon a salient point, as there are many schools within Okinawan karate that all have common roots in the traditional martial arts of the centuries old Ryukyu Kingdom, but have forged their own identities as individual teachers refine techniques and push the boundaries of the art. These branches of karate, known as ‘ryuha’ in Japanese, have long been protective of their identity and uniqueness, but Akamine Sensei sees kobudo as being removed from such debates and rivalry between schools. “Kobudo sits outside ryuha, it is a rich pathway to explore an underlying and universal spirit of karate regardless of ryuha affiliation.”

It is this appeal to the universal foundations of karate that have long made Shimbukan Dojo a popular destination for international karate devotees wanting to deepen their understanding of martial arts. While international travel restrictions brought on by the pandemic temporarily limited numbers, in the coming years Akamine Sensei will continue hosting groups or individual students, and all, regardless of ryuha affiliation or experience, are welcome to join. For anyone interested in participating they are welcome to contact Shimbukan directly or make use of one of the karate tour specialist operators which offer comprehensive karate-based tours around Okinawa.

“Okinawa is like the Mecca of Karate, and for people on the karate path, at some point it will become important for them to visit the islands."

The ever-expanding numbers of karate practitioners, currently some 130 million worldwide, and Japan’s emergence as a popular international travel destination, sparked efforts to highlight Okinawa as the birthplace of karate. 2017 saw the opening of the Okinawa Karate Kaikan, the first physical home for all forms of karate and kobudo in Okinawa. James notes, “This has been a hugely significant development, and it is a massive step forward to have a physical home to hold events and to seek advice on karate training, and to discover the rich history of the art and its deep connection to the culture of these islands.”

James elaborates, “The people that come to Okinawa to deepen their skill and understanding of karate are very passionate, and this influx of enthusiasm from outside has been an important stimulus to the rejuvenation and consolidation of karate within Okinawan society.” He speaks from personal experience. Twelve years prior James made Okinawa his home, and his subsequent years have been devoted to not only deepening his skills and understanding of karate, but also establishing a bridging role connecting the many karate practitioners around the world with the wealth of opportunities to learn and practice karate in Okinawa.

Seeing an unfulfilled need within karate tourism, James established the DOJO Bar in 2011. “When I first came to Okinawa, aside from special events and tournaments, which were infrequent, I found it hard to connect with international karate people. In fact, it was difficult even to gauge how many people from overseas there were involved in or visiting Okinawa’s karate scene, as it was hard to see them in one place.” He had a hunch that if there was a place that karate people knew other karate people would be, they would very likely to go there because they would be very likely to have a good time.

Opening the bar was always envisioned as a place beyond a particular ryuha, it was a place for all people to gather, socialize, and share their passion for martial arts. Before long DOJO Bar had established itself as a destination for karate visitors, helped in large part by customers sharing their experiences on social media. But the bar was not just for overseas visitors says James, “DOJO Bar became a bridge between locals and people from overseas. Especially for international visitors, it was such a rare thing to be able to sit down and have a casual conversation with an Okinawan master, they would always be really impressed, and this was one of the drivers behind its success on social media.” 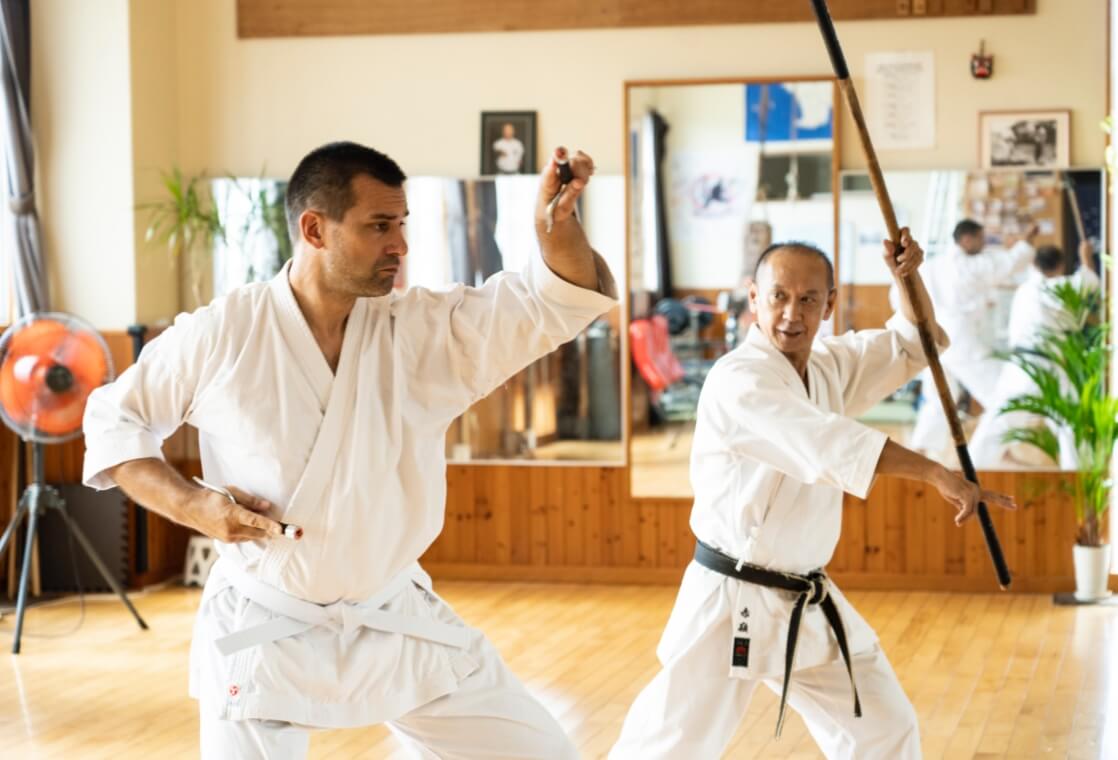 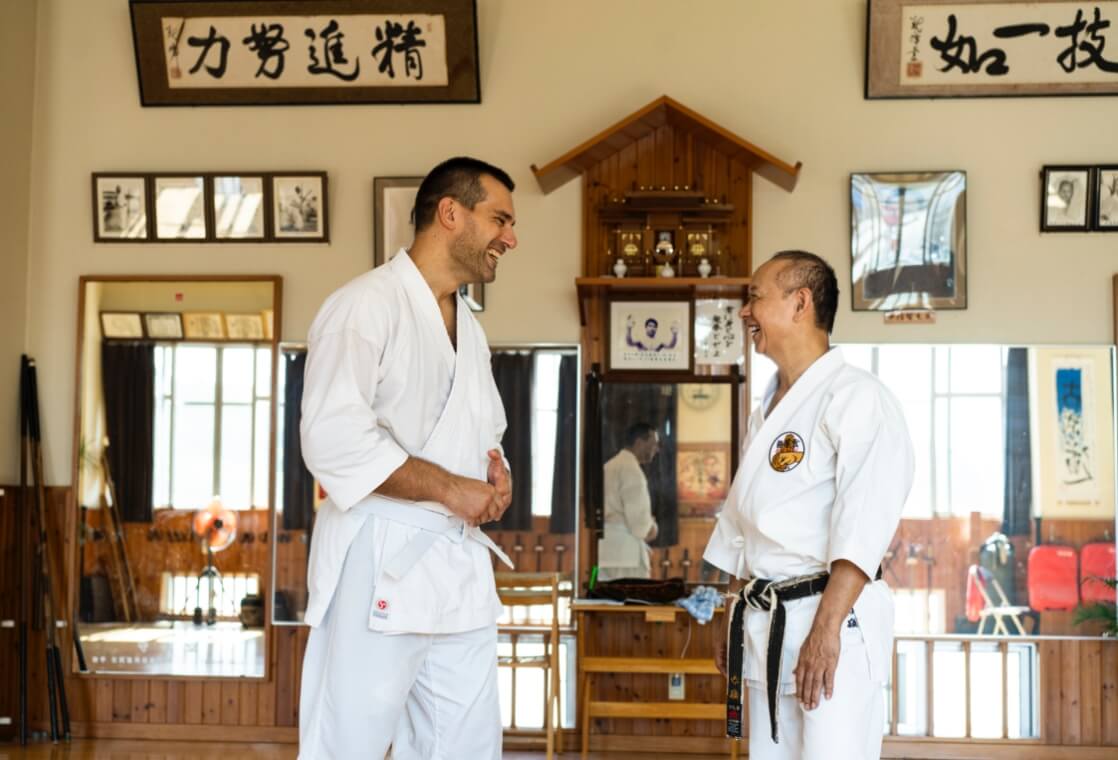 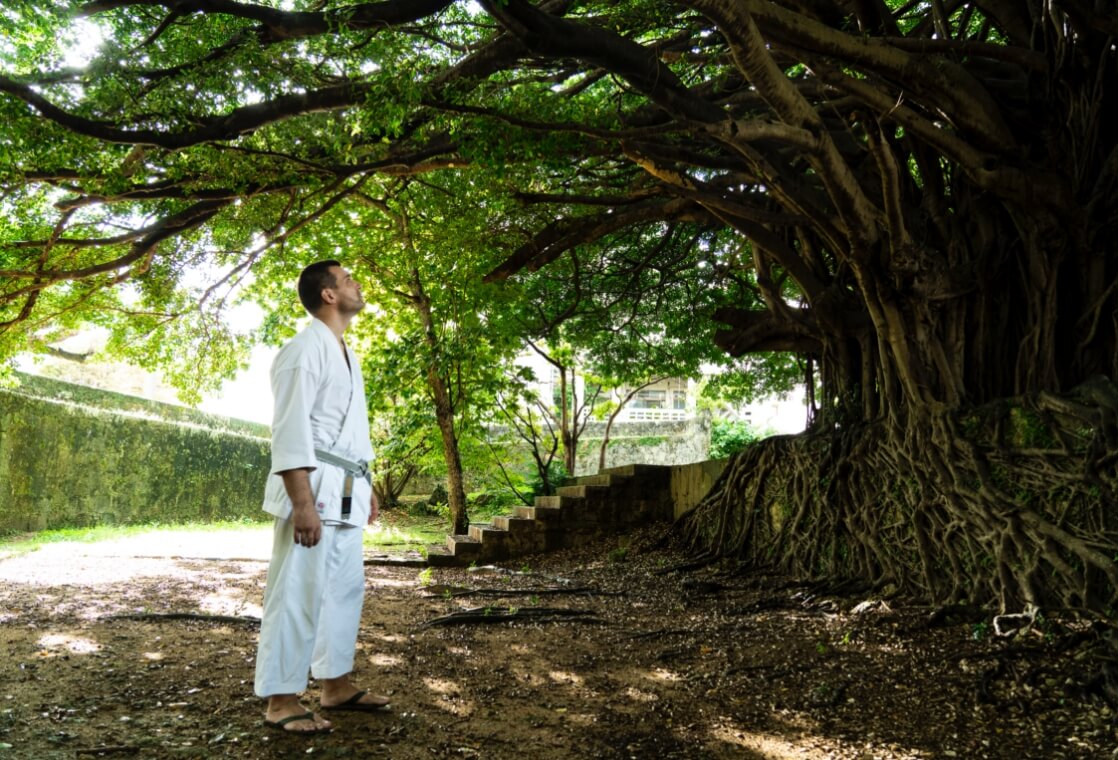 “Like the DOJO Bar, Asato Dojo was conceived as a bridge to connect people with the martial arts scene here in Okinawa, as well as give an insight into the birthplace of karate to visitors.”

Unfortunately, due to the pandemic the Dojo Bar is currently in hiatus, but plans are underway for a Dojo Bar 2 in the future, so stay tuned. However, even before this development, James had taken another step toward creating bridges between Okinawan karate and martial arts practitioners around world. James opened Asato Dojo in 2018 as an ‘international’ dojo, a place for karate instruction in Japanese and English. Kids’ karate in English is popular with local school children and visiting international students can get exposure to Okinawan culture. “The dojo is an ever-evolving thing, but we try to stick to authenticity in what we do, and be open to ideas and questions, and welcoming of people to come and share information as teachers or as students following similar paths.”

James is well aware that bridges between cultures work in both directions. “Because we started online teaching soon after the pandemic started, and have the necessary equipment, we have also been able to include Okinawan teachers as part of our seminar series. This has given them exposure to an international audience, and they have proved some of our most popular seminars.” In 2020, James extended this concept further by co-founding Bujin TV, a martial arts streaming service delivering a curated collection of online instructional and informational content. With a grin he says they are trying to become the Netflix of martial arts by putting the best content in one place and systematically organizing it for people of a particular style or interest.

Connecting martial artists in Okinawa and outside world is an ongoing passion for James, something encapsulated by the 100 Kata Challenge for Karate Day, a side event for Okinawa’s commemoration of Karate Day, held every year on October 25th. Convinced Karate Day was a great idea, James looked into seeing how he could contribute and get more people involved, especially people living overseas that were limited in how they could participate. His solution was to encourage people to join him and others in Okinawa performing 100 repetitions of a kata (a set combination of karate movements), and people could join in no matter where they were in the world. It has proved a success, from its start in 2014, and has grown to more than 100 locations around the globe participating in 2021.

“Doing something 100 times, you go through a process of working physically hard on it and working through exhaustion. At this point, you start to learn something new about the kata because you are past trying to put the elements together smoothly, and it starts to become a connected living thing.” James continues, “Karate practice helps develop both the body and the mind, and I genuinely believe it helps you become a better person.” Spreading this message is a very fitting way to celebrate Karate Day.

The Okinawa Karate Kaikan is the definitive one stop location for all things karate related. 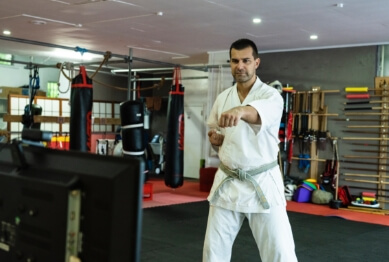 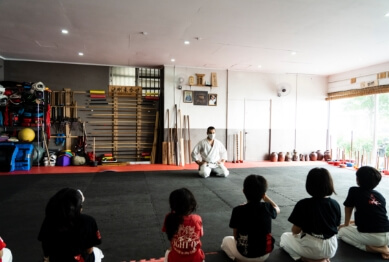 James Pankiewicz has three decades of martial arts practice in a variety of disciplines, and holds a Yon Dan (4th degree black belt) in Matsubayashiryu Karate Do. Originally from England, he has called Okinawa home since 2009, and has immersed himself within the martial arts community as a teacher, student, entrepreneur, and specialist organizer of martial arts events and tours.
http://asatodojo.okinawa/ & https://challengeokinawa.com/