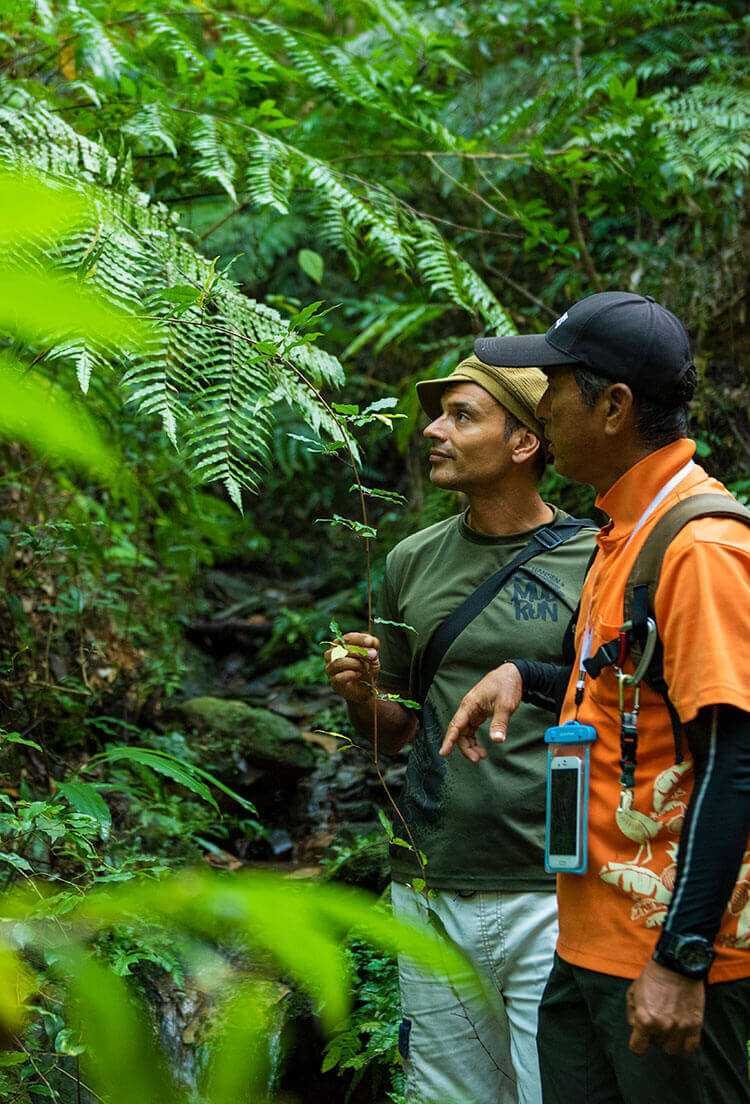 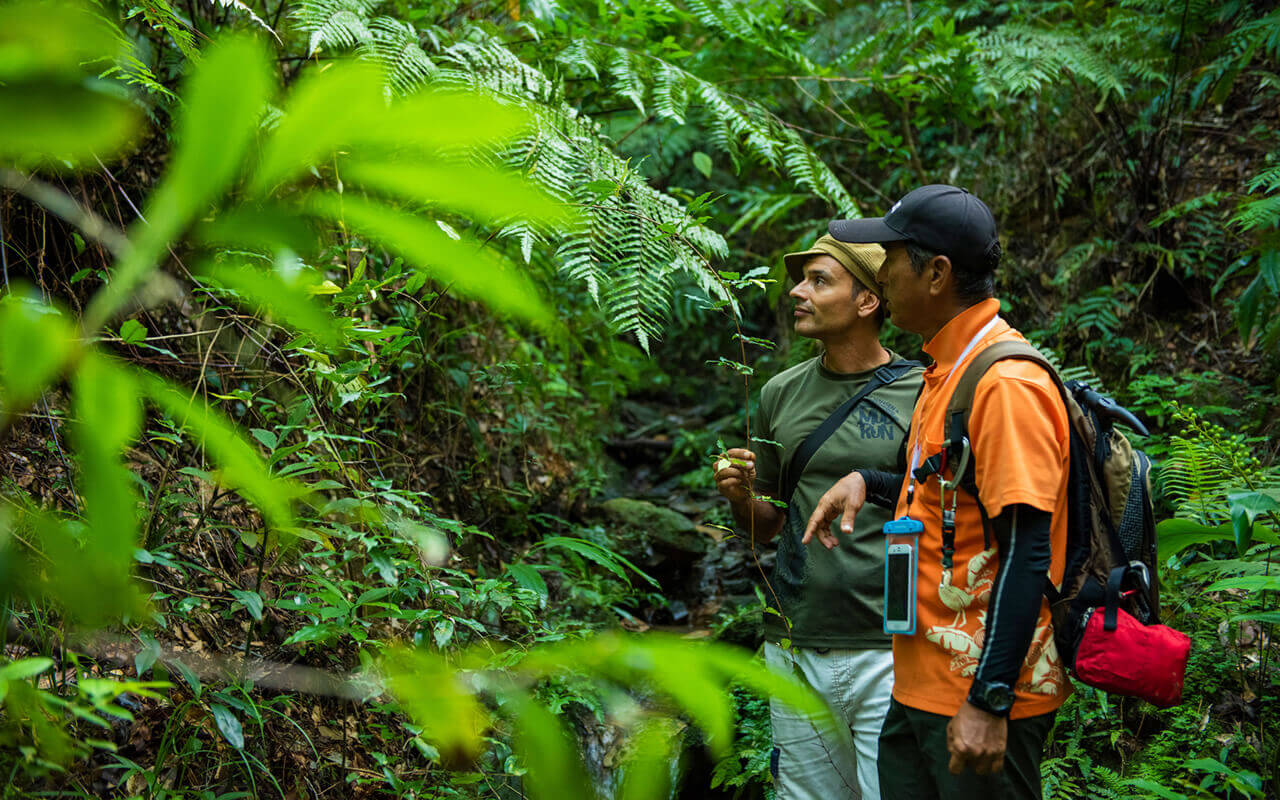 ADVENTURE "It was wonderful to find myself immersed into the deep forests in Yanbaru and be soothed by the calming sounds of the creeks and rivers."

Yanbaru National Park spreads over three villages, Kunigami, Higashi, and Ogimi, which together form the northernmost region of the island. The Hidden Jungle Tour started the first day of the Yanbaru 2-day Retreat Trip from Higashi Village that is 70% covered with Yanbaru’s subtropical forest. The name Yanbaru is written in two Chinese characters that mean "a mountain" and "a field" and can be described as "a region where the mountains stretch and forests spread."

As we approach Yanbaru, the dark green mountain range stretches near to the coast. Small villages with old houses and tiled roofs, and traditional small shops instead of convenience stores blend in the natural scenery of the forest and sea. It’s far different from the areas in the middle and south of the island. In the deep forest, water from countless swamps and rivers flows towards the sea through numerous waterfalls. Yanbaru is also home to many animals and plants that only live here.

After a briefing by our veteran guide, Higa-san, we boarded the kayaks and headed for the hidden forest. We listened to Higa-san’s explanation about the Fukuchi Dam, the largest water reservoir in the prefecture that is built on the top of a mountain and from where water can be released directly into the sea. The surrounding forest and the blue sky were reflected on the fantastic surface of the lake like an artist's painting as we glided along with great speed. As we went deeper into the jungle, the waterway became narrower, and subtropical plants, such as ferns, arched over the surface of the lake. We paddled our kayaks for about 30 minutes and set foot into the unexplored forest, where the untouched nature was waiting in the jungle.

"The further we paddled on the dam and the deeper we walked into the jungle, the more adventure I felt. At the same time while kayaking, I was forgetting my sense of time while enjoying the beauty of the water surface reflecting the blue sky and surrounding forests. "It was a very relaxing time," said Miltos.

The tours that started in 2018 allow visitors to access the jungle only by kayak with a guide approved by the local council. Even in the scorching summer heat, the woods are cool, and the sounds of a mountain stream, the breeze blowing through, and the chirping of birds are pleasant in the clear air.

As Higa-san, our guide, calls, "It’s easier to climb from here," I proceed step by step trying not to slip on a moss-covered rocky terrain. 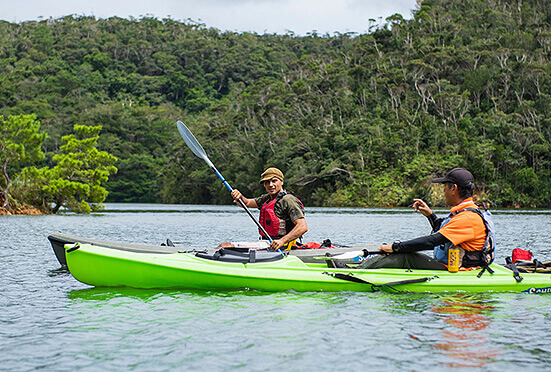 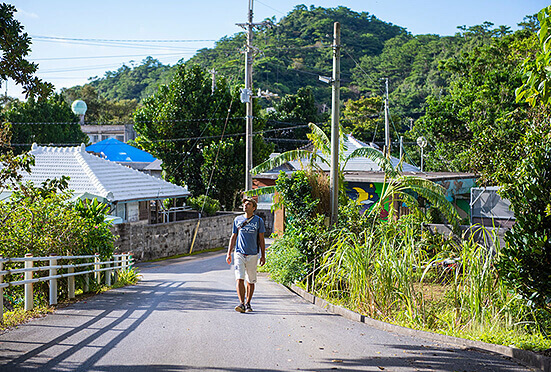 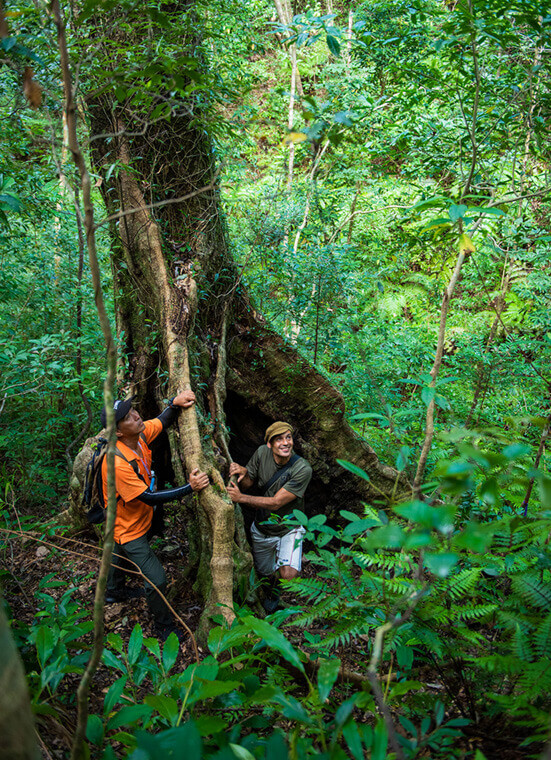 "One of the attractions of Okinawa is that you can escape from the hectic pace of modern life and enjoy nature in an environment far from your everyday surroundings."

In the jungle (take off where) lizards roam as if they were time-slipped from the distant past and climb on the rocks in a clear stream that flows like a small waterfall. Time to take a break by the river and eat the rice balls we brought with us.

"In Okinawa, there is often talk of fairies and trickster spirits living in these forests. They are hard to see in physical form, but you can appreciate their presence in the gentle sounds of nature and the rustling of the leaves of the trees," Miltos says.

The forest bath seems to have refreshed me. I enjoyed the hour and a half trek. I admire the giant 100-year-old Quercus Miyagii-tree (Okinawa urashirogashi) that even several people can't stretch their arms around and with big plate roots that can hide a full-grown man. The tour ended with a smooth kayak ride back across the dam with the sun glittering on the surface, a different experience from the morning.

Going north to Kunigami Village, feeling comfortable but tired after completing the hiking tour at Higashi, we stopped on the way at the popular Kunigami Port Shokudo, which fishermen from Kunigami Village run directly. There, we enjoyed fresh seafood sashimi and a butter grilled local fish set. "I use my fingers to eat the fish's head and cheeks, just like in my home country," Miltos exclaimed delighted, while enjoying the meal and talking with local patrons, as if they were warm old friends. "I felt very much at home with it," he said.

Kunigami Village at the northernmost tip of Okinawa faces the East China Sea to the west and the Pacific Ocean to the east. The village has a population of about 5,000. (add period) It’s the fifth largest village by area on the island while about 90% of it is forest. There are four forest therapy roads open throughout the year, leading to Yasuzu Mountain, which local villagers have worshipped as a holy place, Mt. Yonaha, the highest peak of the main island, Hiji Falls in the Kunigami Village Forest Park, and Yanbaru Learning Forest. Visitors can find information and make tour booking at the The Village Office. Our destination for staying in Yanbaru was "Ada Garden Hotel Okinawa" located in the northernmost part of the main island in Ada on the east side of Kunigami Village. Unlike the western area where Cape Hedo and Okuma Beach are located, the Ada area, which takes about 30 minutes by car across the mountains from the west coast to the east, is a region that locals rarely visit. That is why Yanbaru Kuina, a flightless bird and designated natural monument often inhabits the forests here. 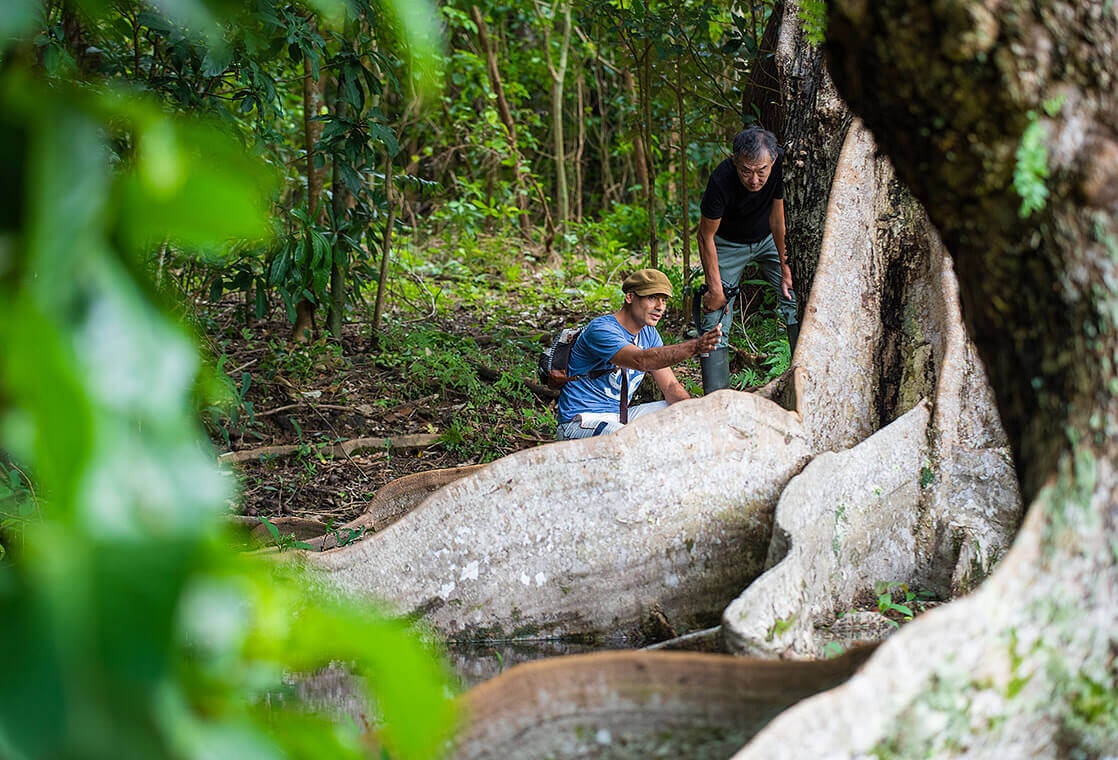 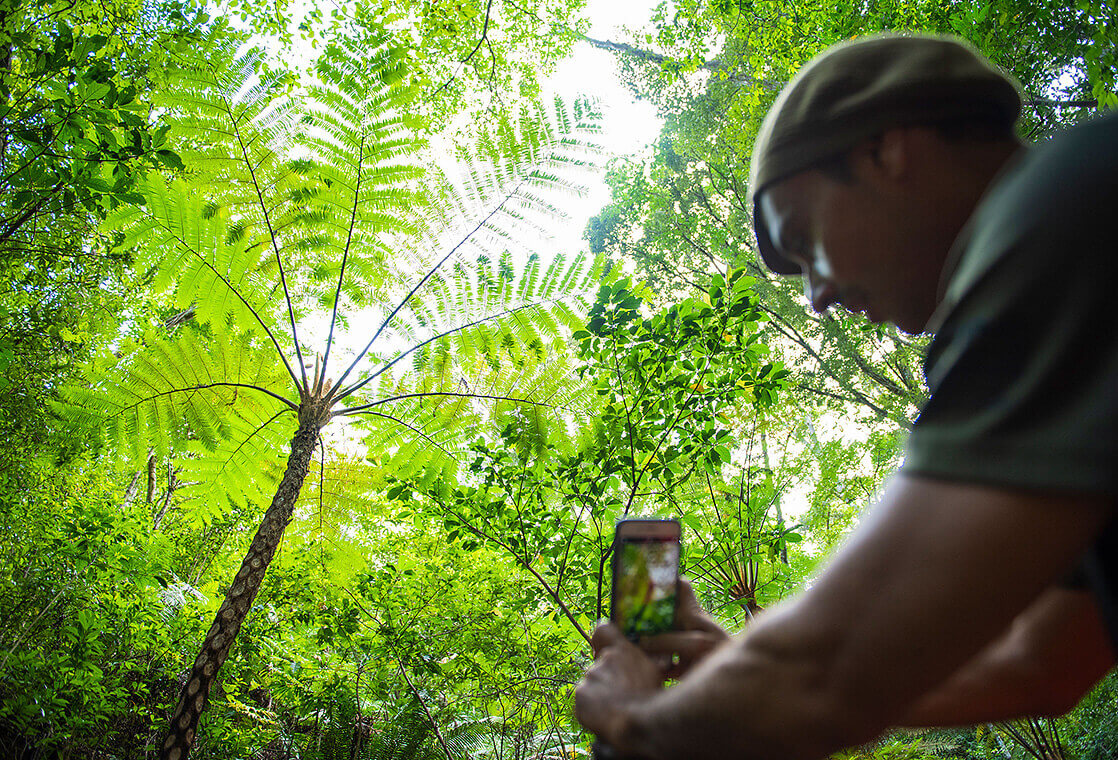 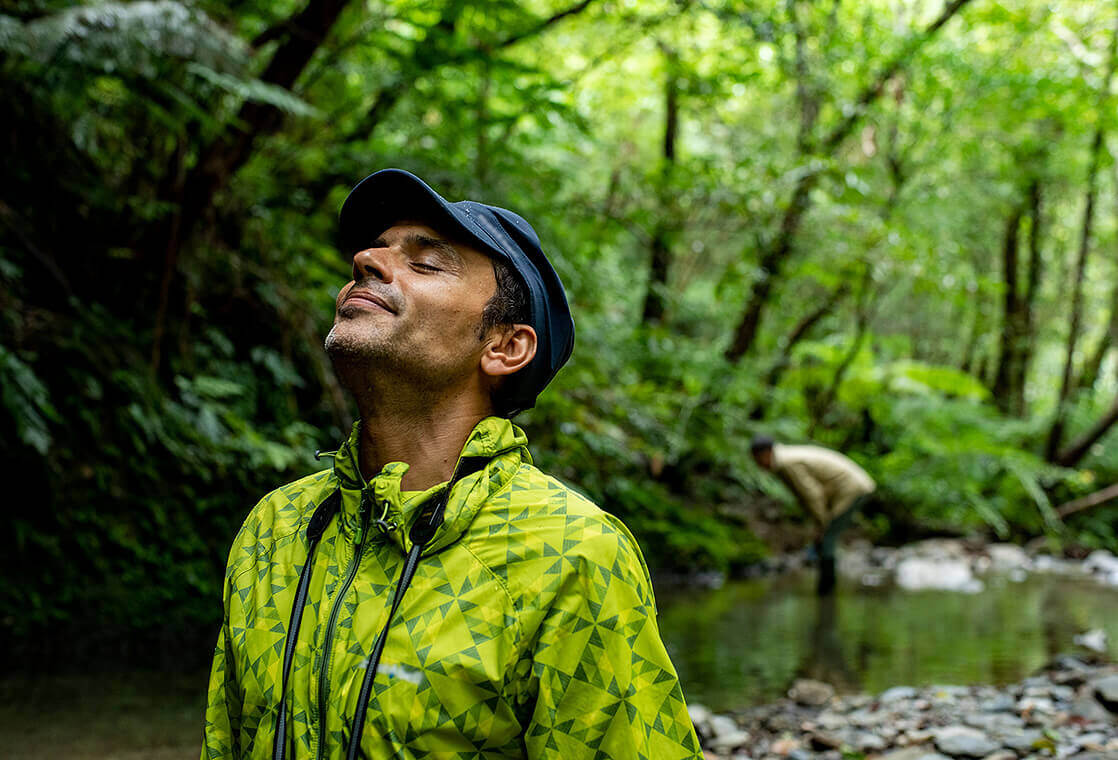 "I fully enjoyed the forest as all my senses opened up to absorb its wisdom while my soul delighted at the opportunity to enjoy its mysteries and become refreshed."

Looking at the aerial photos, you can see that Ada Garden Hotel Okinawa is in the subtropical jungle. When I was taking a break on the hotel terrace, Ichiro Kikuta, an artist who was to accompany me as a nature guide the next morning, stopped by. It was a nice surprise. He pointed to a Yambaru Kuina on a tree branch on the side of the road near the hotel. Ichiro is an artist who has set up his atelier in the village and works on a series called Yanbaru Kafu, drawing Yanbaru scenery on hand-made Japanese paper. He is a wild bird enthusiast and also a member of a team that was invited to take part in a successful project that, about 15 years ago, engaged in an artificial breeding program to protect Yanbaru Kuina, which faced a crisis of extinction.

On the second day in Yanbaru, in response to Miltos’ request, "I’d like to practice yoga while soaking in the sunrise," our guide Ichiro took us to Ada Beach. The beach offers a dynamic view of the hills of Yanbaru that line up along the coast. That was a wonderful experience early in the morning. After that, Kikuta-san guided us through various nature spots that are also subjects of his sumi-e paintings, such as rivers, waterfalls and clear streams. We found edible wild grass growing on limestone cliffs and listened to the drumming of 'Noguchigera' pecking trees, which is a threatened woodpecker species living only in Yanbaru. Kikuta-san immediately noticed that the bird is in a tree and shared his binoculars with everyone to see. We enjoyed a wide variety of creatures and the mysteries of nature on our several-hour tour.

"The Yanbaru walk with Kikuta-san, who is very familiar with the nature and history of Yanbaru, was a very interesting experience. Exploring the area and seeing Yanbaru Kuina many times was impressive. As an eco-enthusiast, staying at the Ada Garden Hotel with its beautiful views of the forest and the sea, and the harmony of the atmosphere inspired by the surrounding nature was everything I had been looking for."

In addition to this experience tour, there is a seasonal tour "Ucor Mountain Course" that takes you on a trek through the subtropical forest to observe and immerse yourself in nature. Your destination is a hidden forest in a national park accessible only by canoe. The tour takes about 5 hours. You can fully enjoy the nature with this tour in a small group of up to 6 people.

Ichiro Kikuta moved to Ada in 2006 after becoming fascinated by the nature around the Ada Village in Kunigami. His "Yanbaru Kafu" works feature Yanbaru's nature in monochrome sumi-e drawings on handmade Japanese paper. His subjects feature a deep green forest, the bright red beaks and feet of Yanbaru Kuina and expressions of nature. Reservations for guided wild bird and nature tours can be made at Kikuta’s website.

The long-established hotel is located in the northernmost part of Okinawa Main Island. The hotel was built in 2000 and its construction materials and furniture were imported from Vietnam as a show of friendship between Okinawa and Vietnam. Many bird lovers from Japan and abroad visit the hotel during the bird watching season from November through March. 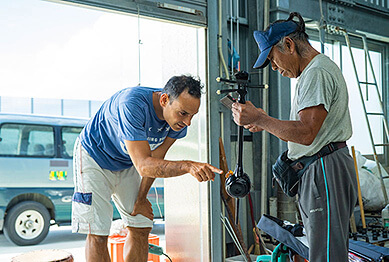 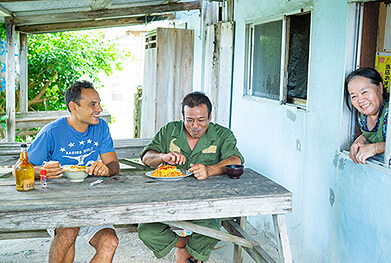 "Born in Greece. I have lived in Okinawa for 5 years. With its unique culture, wonderful nature, and world-class entertainment, the island fills me with excitement and curiosity. Since the day I arrived, I have enjoyed such activities as Okinawa karate, tea ceremony, surfing and street dancing."