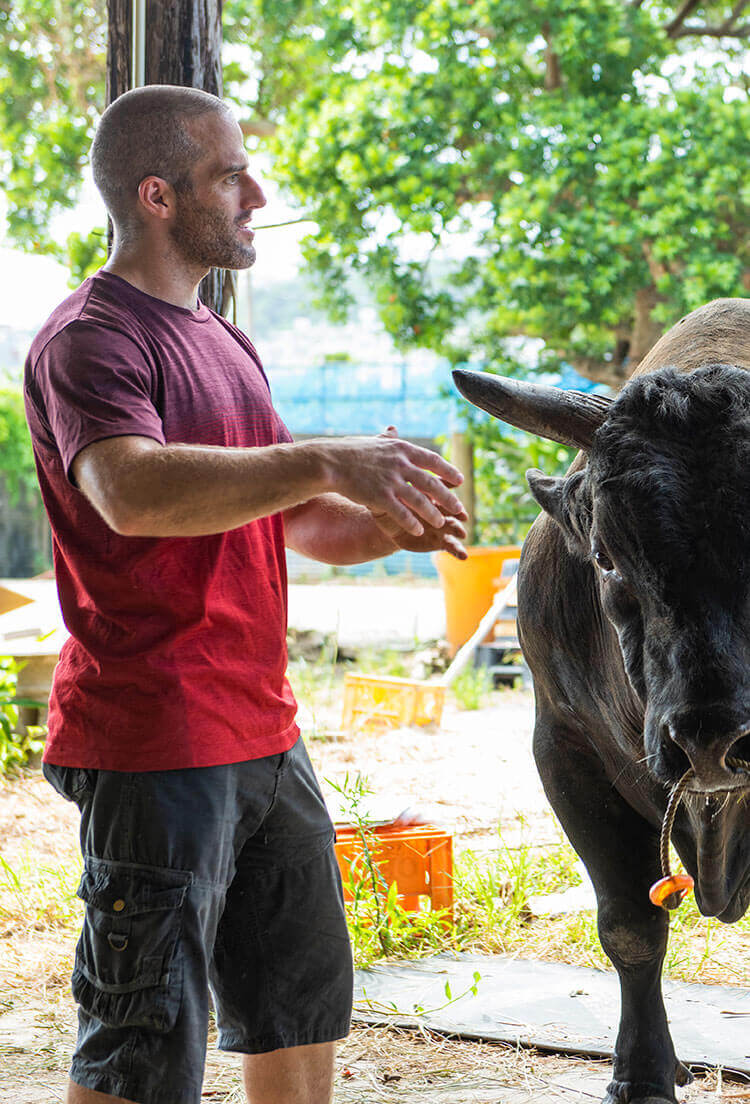 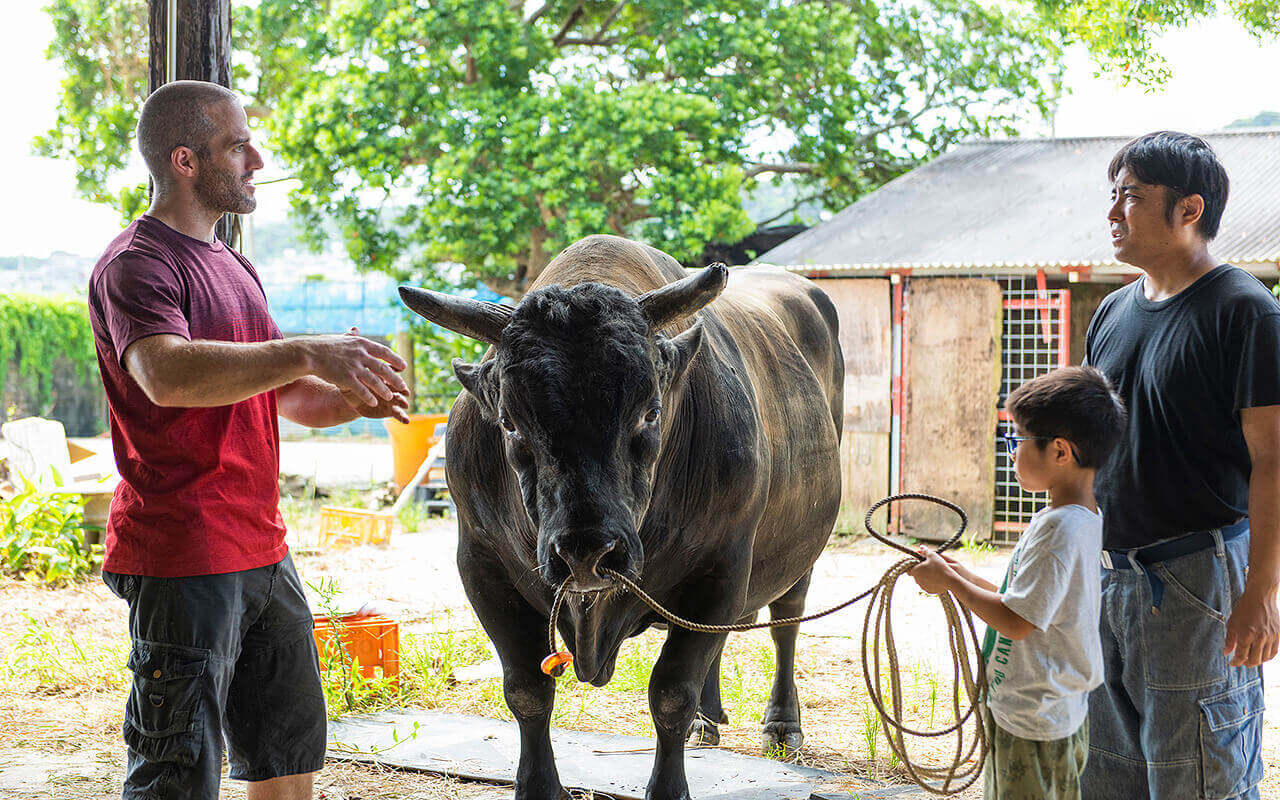 TRADITION"It was very interesting to visit the stable and meet the owner. It is always a pleasure to visit rural Okinawa that, in my mind, is the real Okinawa."

At a time when leisurely pastimes were scarce, Okinawan bullfighting was extremely popular in the rural areas of Okinawa and people flocked to the tournaments held throughout the island. Local bullfighting ceased for a while in the chaos of war, but postwar the tournaments soon resumed, and a great number of "star" bulls were introduced to the scene, which further attracted local fans. During those times, Uruma City was home to six bullfighting arenas, but the advance of urbanization led to the downsizing of the arenas, and the changing times brought an array of new entertainment. The popularity of bullfighting dwindled.

Still, with the only all-weather bullfighting arena in Okinawa, Uruma City frequently holds all-island bullfighting tournaments to the delight of many locals and visitors. Bullfighting has gone beyond a simple form of entertainment for the locals and become a major part of the city’s culture, as its traditions are handed down to the younger generations.

What makes Okinawa’s bullfighting unique is that it isn’t a match pitting a man against a bull. Rather, it’s a match between two bulls that lock their horns and engage in a great test of strength.

The rules are quite simple. The bull that runs away or doesn’t engage in the match loses. As simple as the basic rule seems, Okinawa’s bullfighting is exciting because there’s more to it than that. A bull may seem initially unengaged, but suddenly and with great force, it will charge and force a win without much fight from its opponent. There are other bulls that will endure the attacks, waiting patiently for the opponent to tire, and at the right moment, win the match in a turnaround. Then, there are also those bulls that fight fiercely for a minute or two, and then to the surprise of the spectators, they simply give up and run away like a frightened rabbit. The bulls display their diverse characteristics in these matches and that’s what makes bullfighting so exciting to watch. Some bulls refuse to even enter the arena out of fear, and some simply run in circles around their opponent, while some will show signs of surrender from the get-go. As the victory and defeat in Okinawan bullfighting is determined once one bull shows it’s no longer willing to fight and, in such cases, the other bull wins the match by default.

Kevin began learning combat karate in England when he was only 12 years old and enjoyed it as a sport. After relocating to Japan, he learned that traditional karate originated in Okinawa. While living in mainland Japan, he learned about the World Oshukai Federation. Master karateka Kenyu Chinen who relocated to France in 1979 founded the federation to spread the teachings of Okinawan karate in Europe. Kevin became an instructor for the World Oshukai Federation, which led to his relocation to Okinawa in 2011.

Okinawan karate has been carefully handed down the generations as "the martial art of peace" and is not simply about strength and skill. The spirit and essence of Okinawan karate is described by the great masters as "to win without fighting." It is this philosophy and spiritual strength of "be not harmed by others and do not harm others, as all is good without any harm done," that has been cherished, protected and passed on to karateka around the world. 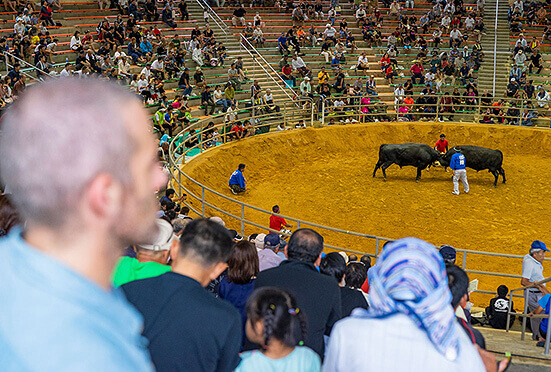 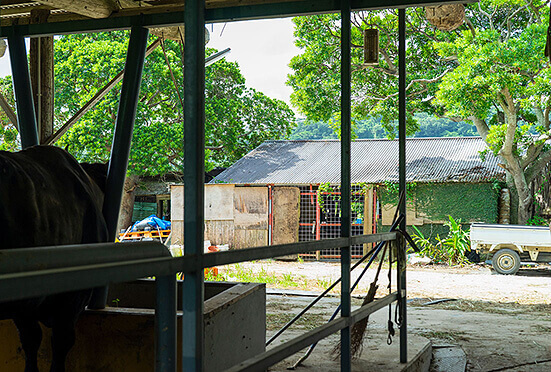 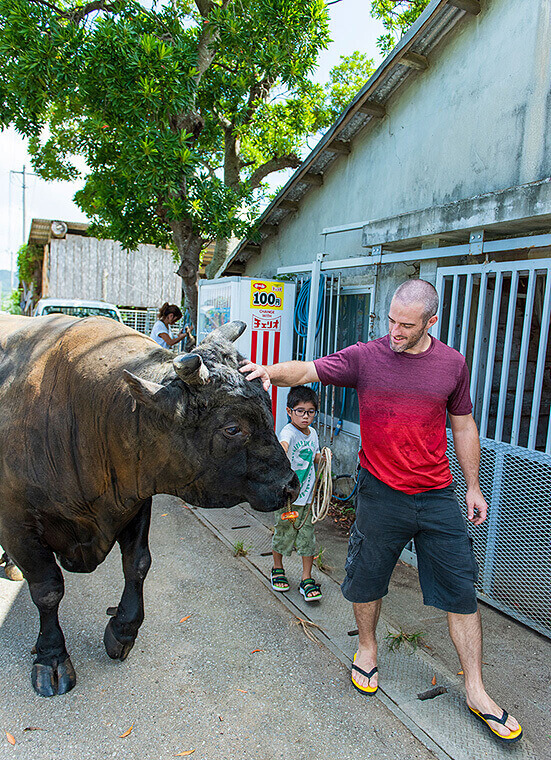 "As a Karate practitioner and instructor, I was keen to learn more about how the bulls ‘fight.’"

On a typically hot Okinawan day, just before a big tournament, we went to visit the Kochi family, who has raised bulls in Uruma City for generations. We also visited their old bull shed that was built in the ‘70s and still stands on the family property. The Kochis are passionate about bullfighting, and in the past, they’ve raised three bulls that became Okinawa champions. Before the ever-expanding urban development on the island, bulls and their owners lived side-by-side on the property, like a true family, but with the changing of times, building new sheds has become difficult, as environmental issues such as odors and others must be considered.

The Kochi family are determined to prevent bullfighting from becoming something of the past. Already, their seven-year-old son, Takuma, is determined to be the 3rd generation bullfighter of the family. The young boy takes the huge bull weighing about a ton on daily walks around the neighborhood and tends to the bull every day from early in the morning, cleaning the shed, gathering feed, bathing, feeding, and doing all the other tasks that require dedication and passion. It takes about 40,000 yen a month to feed a bull, and as with caring for all living things, there are no days off. It takes about five to six years of constant caring, 365 days a year, for a bull to debut as a fighting bull. To maintain stamina in the hot summer months, it’s important to bathe the bull and give him thorough care for it to become strong. The dedication to raising these bulls comes with long hours of hard work and commitment, but Kochi-san explains that the excitement and joy of a bull winning at a match, make it all worth it.

Kevin’s conclusion: bullfighting and karate, two seemingly irrelevant things actually have a common denominator; the spirit of Budo or martial arts. With this common ground, Kevin and Kochi-san enjoyed hours of conversation and exchange of thoughts. 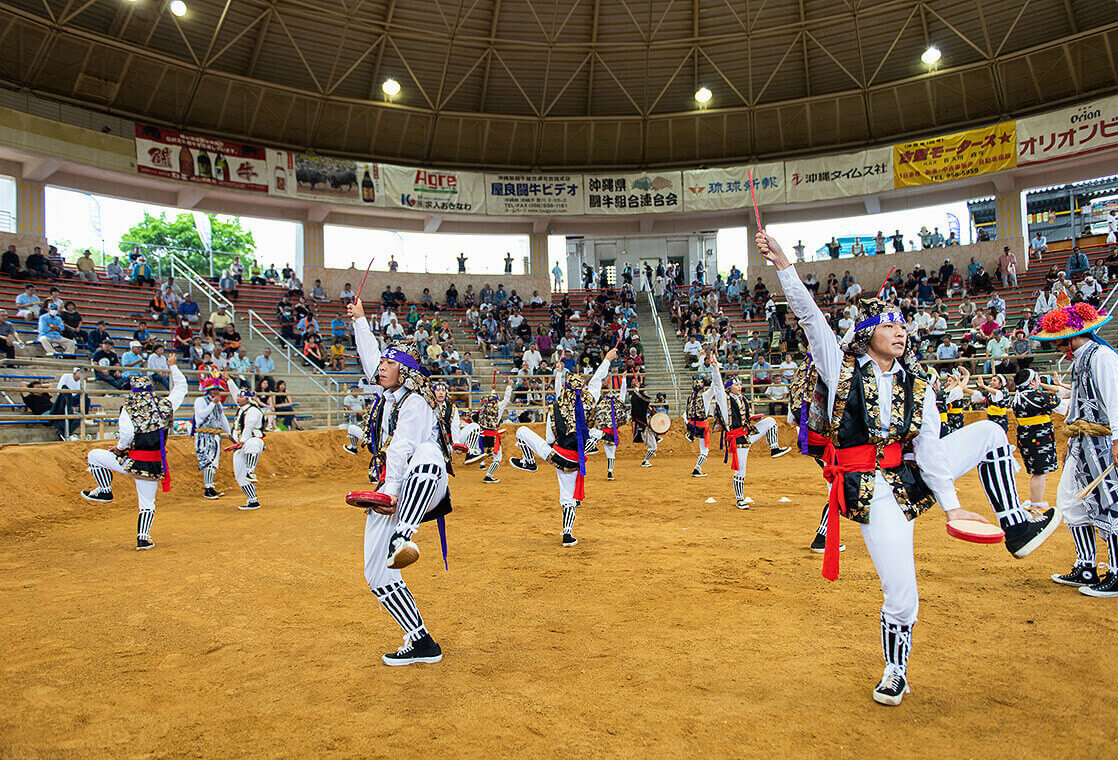 "The stable was no different from any other rustic local cattle sheds made of timber, surrounded by fields and trees and a cool breeze blowing through on an otherwise hot day. It was the perfect setting. Seeing the bulls up close was very impressive. They were relaxing in their stalls, and then, one caught my eye. He was absolutely huge, not at all bothered by our presence and quite calm in his demeanor. He was clearly very strong and experienced, as he sized up his new guests. Later, I learned that this bull was indeed a veteran and champion several times over. "

Talking with the owner was fascinating. I learned that for him and other bull owners this is their hobby and passion. Owners typically have other jobs and are not farmers by trade, nor can they earn enough from competing to sustain the bulls.

"Also, I learned bullfighting is very traditional. The owner I spoke to is the second-generation bullfighter in his family. We also met his son, who represents the 3rd generation, and grandson, a young lad who is already determined to be the 4th generation.

I was deeply impressed by their dedication and passion for raising the bulls. When you spoke to any of them about the bulls their eyes lit up and they were eager to speak at length of any details, from how the bulls are fed and cleaned, to how they are trained." 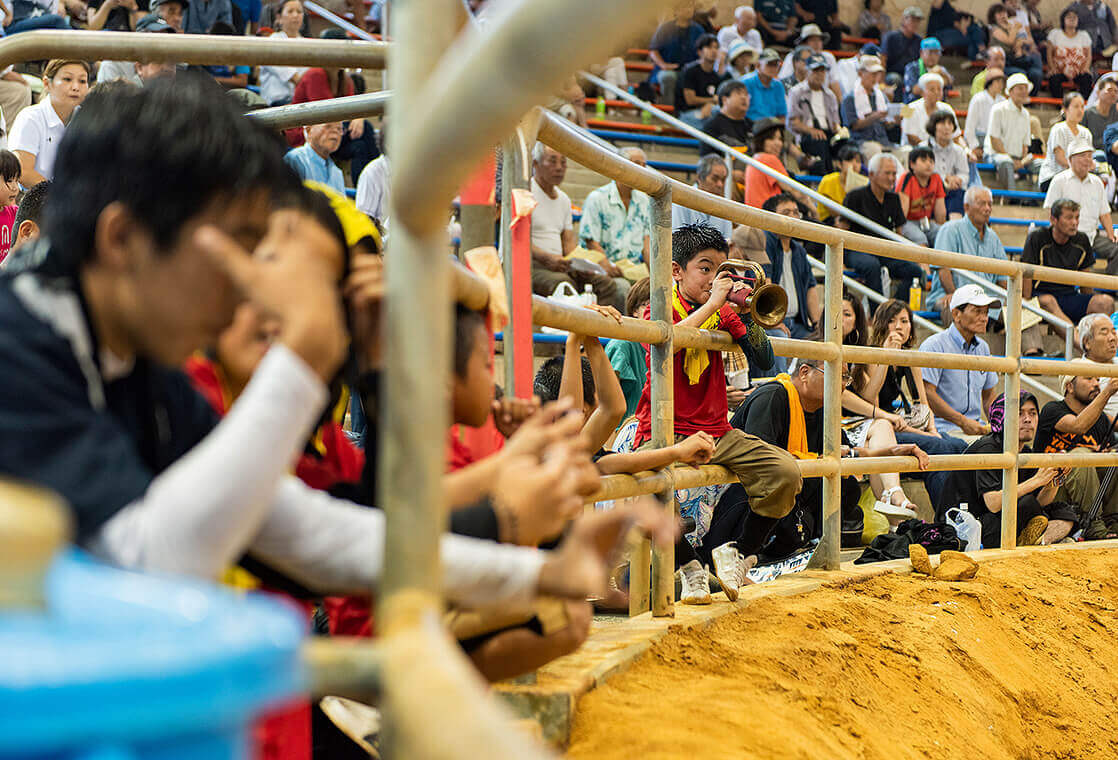 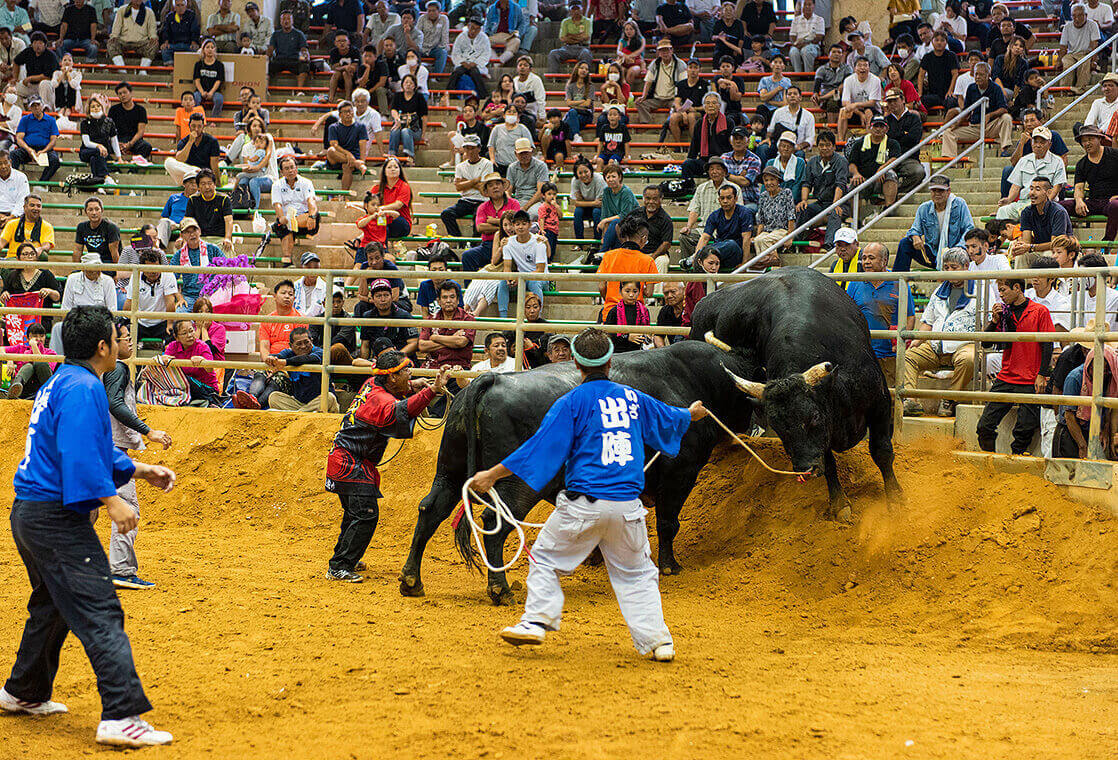 "Overall, I think it’s an event and a part of culture, which would merit greater exposure to the outside world, and would leave visitors with a very memorable experience."

The day of the tournament finally arrives. The owners transport the bulls to the arena in trucks in the order of their scheduled matches. The temporary sheds at the venue are decorated with knots called "san" that are made of Susuki or Japanese pampas grass. The grass knots are believed to chase away bad spirits and bring good luck. The gentle bulls that were lazily enjoying their bathing time at their home-sheds seem to sense the excitement in the air, and in their sheds set up by the arena, they looked pumped up and ready to fight. The owner and their whole families wait quietly for the match alongside their bulls.

Since the domed arena opened, more families have been in the crowds of spectators than before, and there are draws and entertainment for the whole family. The event has a real local feel to it, with a raffle midway with prizes ranging from rice to a TV and even a small truck! On the day of the tournament, the energy was fantastic with large crowds of people of all ages, and even some foreign visitors present. The entertainment ranges from Shishimai lion dance to Eisa and other traditional performing arts of Okinawa. The venue is filled with electric energy, like a cheerful festival.

When a bull wins a match, the excitement reaches a peak, with their owners who have spent many months and years caring for the bulls excitedly celebrate. The bulls seem to share the joy too, as they happily carry children on their backs and people around the winning bull dance to the happy rhythm of Okinawan Kachashii.

Kevin shared the excitement of the scene, saying, "What I saw today completely erased the common conception of bullfighting we have where I come from. The Okinawan bullfighting is truly an intricate part of peoples’ lives. Seeing the children riding the winning bull in joy and excitement after the winner was announced was such a pleasant surprise."

"When I first watched an Okinawan bullfight, I was intrigued by the body language of the bulls. In Karate, the more training and experience you accumulate, the calmer and more composed your fighting becomes, as unnecessary movements and wasted energy are gradually eliminated.

"It’s no different with the bulls. The young ones are full of energy and sometimes win quickly. "

Indeed, in some cases, they destroy the opponents’ will to fight just by a powerful and exuberant entrance into the arena. However, if the bout goes on longer, it’s the calm and confident bull who has the experience and perseverance to see the match through to the end, who wins. When talking to the bulls’ owner, he very much agreed with this observation. He also pointed out that the young bull’s character largely decides his future fighting ability.

"In Karate, I am constantly reminded how important character is in martial arts and in fact, the eventual goal of our training is to improve our character. It was very satisfying to see that same holds true for these magnificent beasts as well."

More than 30 bullfighting tournaments throughout the year take place at Ishikawa Multipurpose Dome, the prefecture's first indoor bullring located in Uruma City. The highlight of the bullfights are the three annual all-island tournaments in the spring, summer, and fall, which are big events attracting about 4,500 spectators each. In addition to bullfighting, audiences enjoy traditional Okinawan performing arts like Lion Dance (Shishimai) and Eisa and appearances by bullfighting character "Bullfighter Wido." 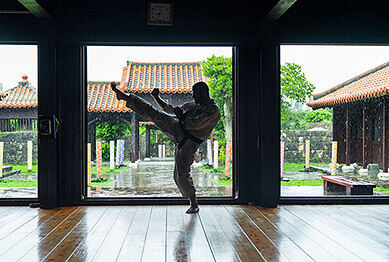 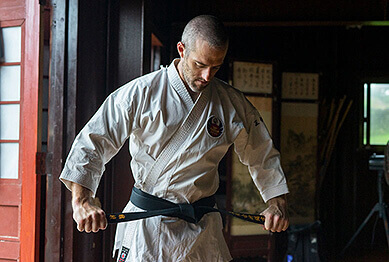 Originally from England, Kevin is a black-belt karateka who has been residing in Okinawa for eight years. He is a dedicated instructor of Okinawan karate at dojos through Okinawa Traditional Karatedo and Kobudo International Study Center and World Oshukai Federation.
https://oshukaijapan.jimdofree.com/