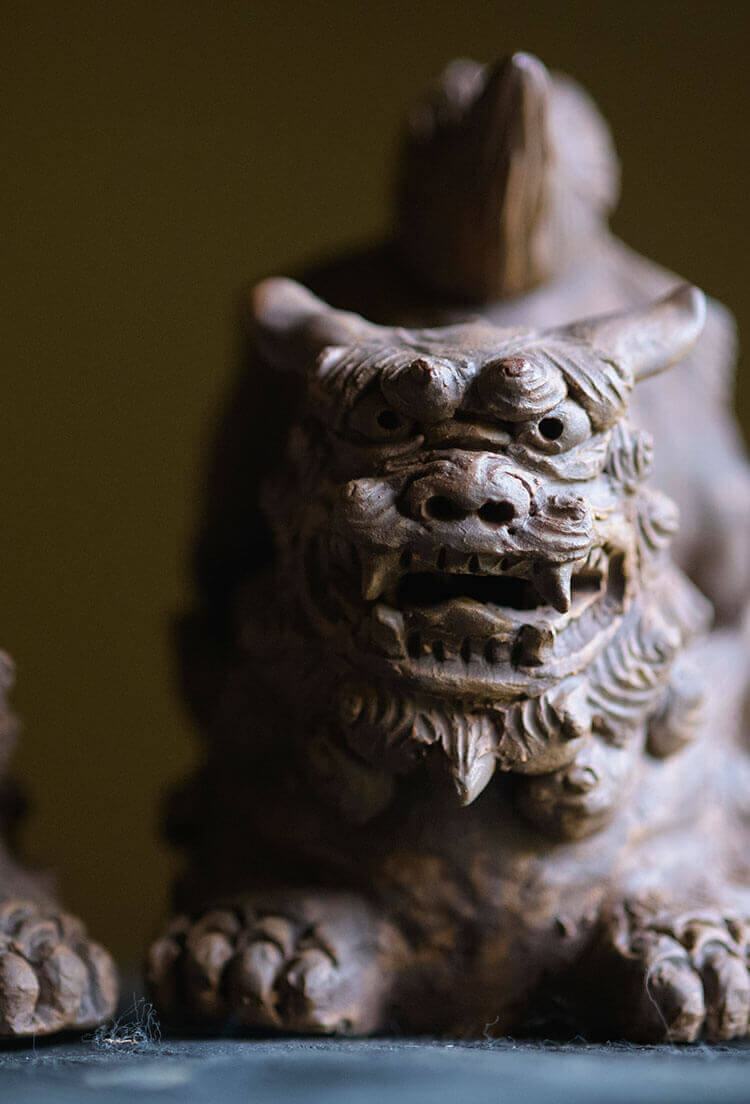 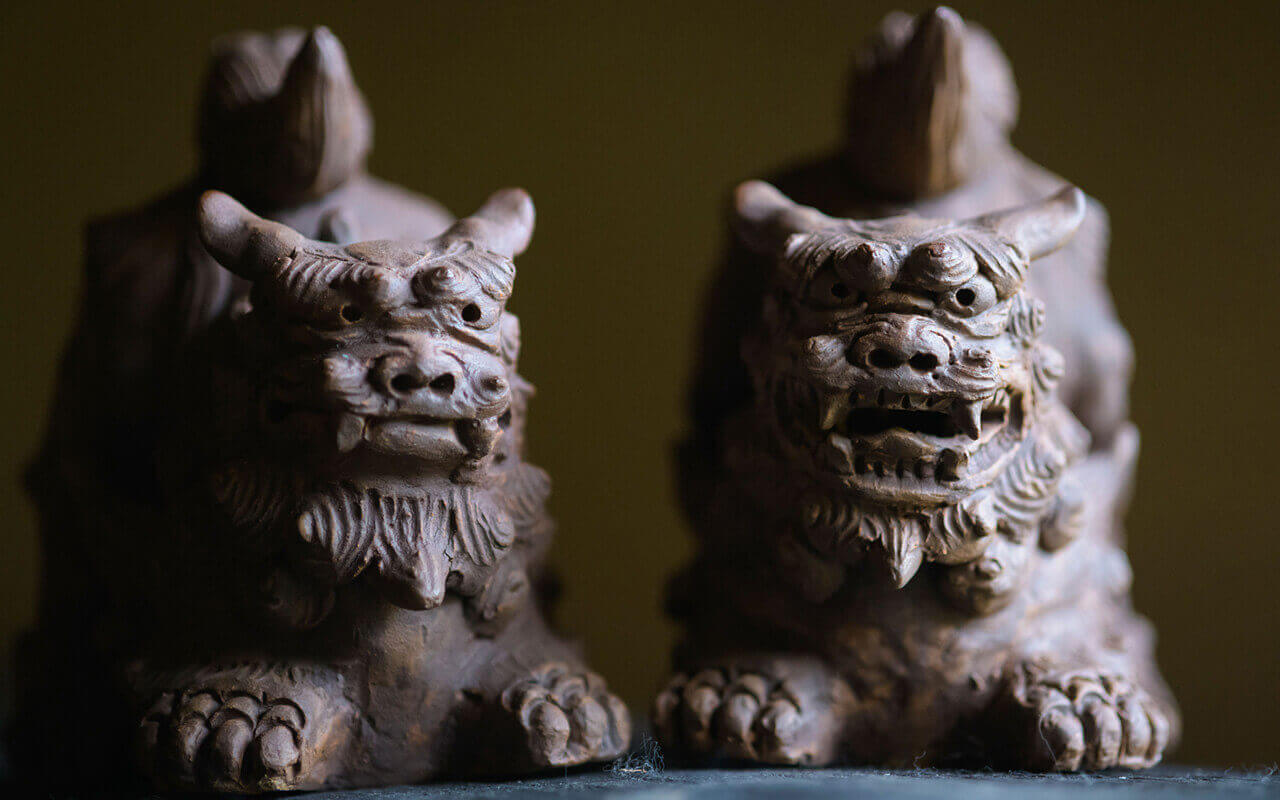 Yachimun is Okinawan for pottery. The Tsuboya district in Naha is the yachimun area where potters traditionally lived. The Shimabukuro family is one of the potter families that have lived in Tsuboya. The father, Joei, still operates Shimabukuro Ceramics Studio in Tsuboya and the son, Katsushi, founded a studio on Miyagi Island in 2009. We talked with the Tsuboya-native potter father and son duo about their love for yachimun. 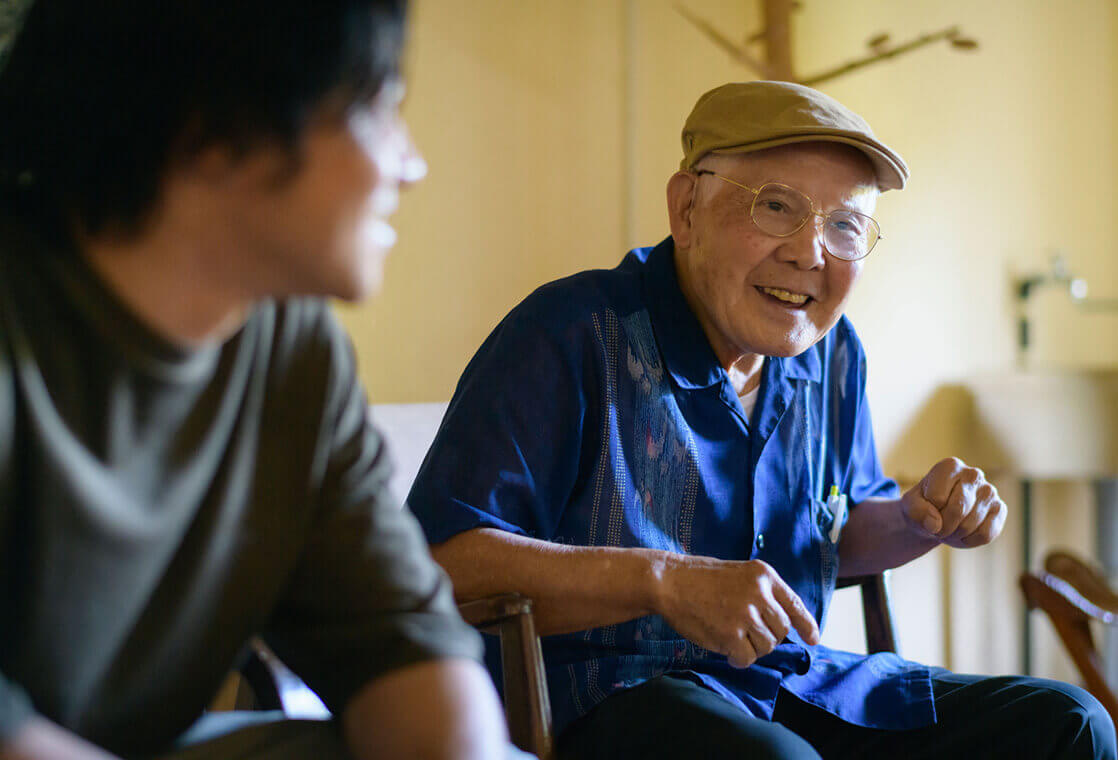 ――Joei, you were certified as a traditional craftsman because your completely traditionally crafted shisa were highly esteemed, right?

Joei: My devotion to the traditional technique is the influence of my teacher and father, Jokei Shimabukuro. In my father’s days, Shimabukuro Ceramics Studio made dishes and shisa. I succeeded in the technique of the shisa division. I also recommended my son, Katsushi, to go into making pottery.

Katsushi: Doing pottery was the natural flow of things, having grown up watching my father. I make both dishes and artwork. The attraction of dishes is that using them on a daily level enriches that person’s time. When I want to express myself more, I create artwork. I choose what I want to make in a natural way. I think people say that my dishes are modern because of the coloring, as I use traditional techniques like pouring and the two-color method and don’t really do anything new. I just think that my style has developed in the way it did because of the times we live in and my sensibilities. 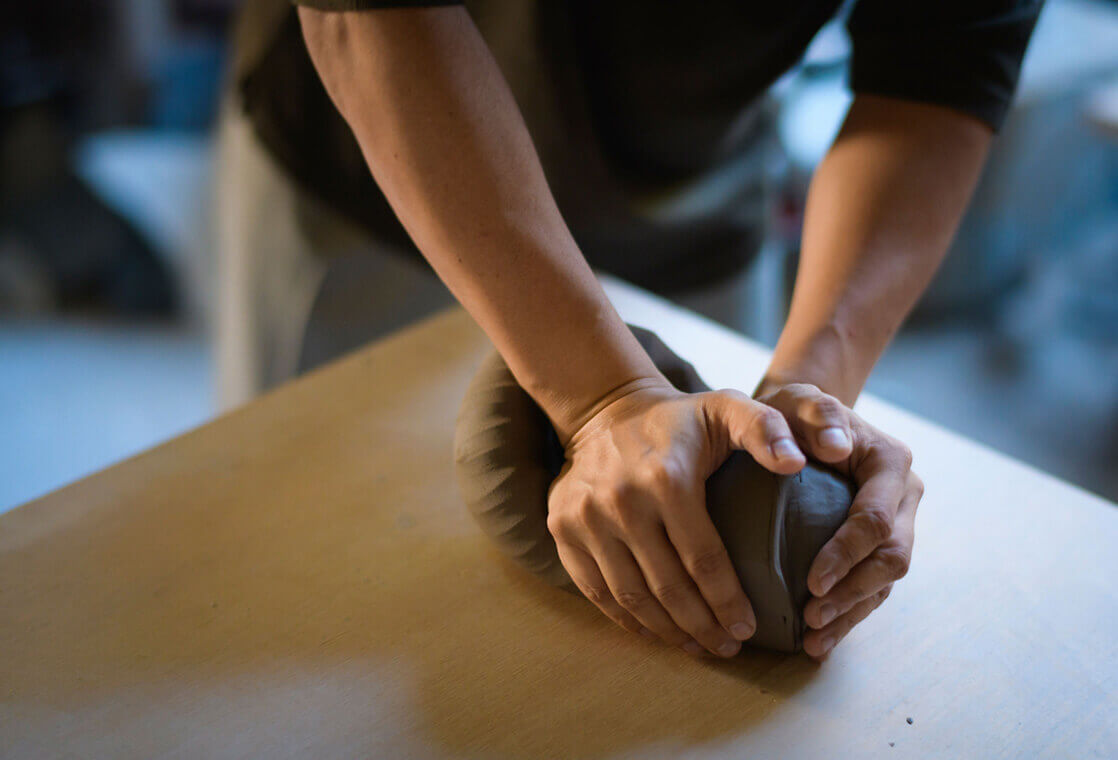 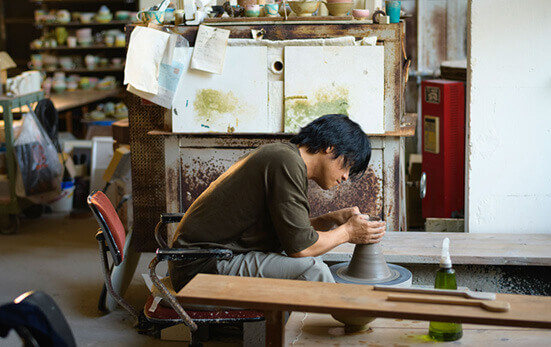 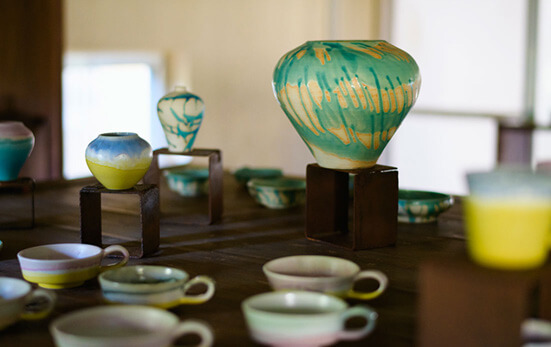 ――Katsushi, you say that you originally liked white and black, but that you started changing in 2009 when you opened your own studio on Miyagi Island.

Katsushi: When I came to Miyagi Island, I started seeing the color of nature. The green of the sugar cane fields, the color of the sky, and the color of the ocean. The rain hits the glass windows of the studio and pours down. The sun comes out and everything shines. It’s just for a moment, but it’s pretty. I started expressing the beauty of those colors in nature.

――I heard that the idea to create something together where Katsushi pours the glaze over the shisa, which you, Joei, made and fired, was proposed by Katsushi.

Joei: It has a completely different kind of taste from the shisa that I make, but I think that’s okay.

Katsushi: The face of the shisa my father makes is powerful. Another thing that’s interesting is that the color is different every time even if it’s the same glaze.

Joei: The reason you don’t get the same color each time is because of “discoloration (unpredictable color changes that happen when firing pottery because of the nature of the fire or minerals in the glaze).”

Katsushi: The coloring can change not just because of temperature, but also because of the amount of oxygen in the kiln. There are times I purposely change the flow of air in the kiln to create some change.

Joei: Kilns each have their own peculiarities, so even if I give advice to him, it wouldn’t help because our kilns are different. You just have to figure out each kiln’s characteristics on your own. I just fire it from the beginning in an old-fashioned way. I fire it for about 5 hours at around 300 Celsius and then I gradually raise the temperature. My son fires in his own way. There will never be two shisa with the same color.

Katsushi: Depending on the level of concentration of the oxygen, the celadon (ceramics with a blue-green colored glaze) will change to purple, to a kind of fuchsia pink, to then whitish, and then to red.

Joei: Gas kilns are like that too, but what causes the most discoloration is the noborigama (connected pottery kilns built on a slope). You use wood for firewood, so you have no idea what it looks like until you take it out of the kiln and look at it.

Katsushi: As my father says, it might be more interesting to use the noborigama for the shisa. Eventually, I would like to have a noborigama, too. 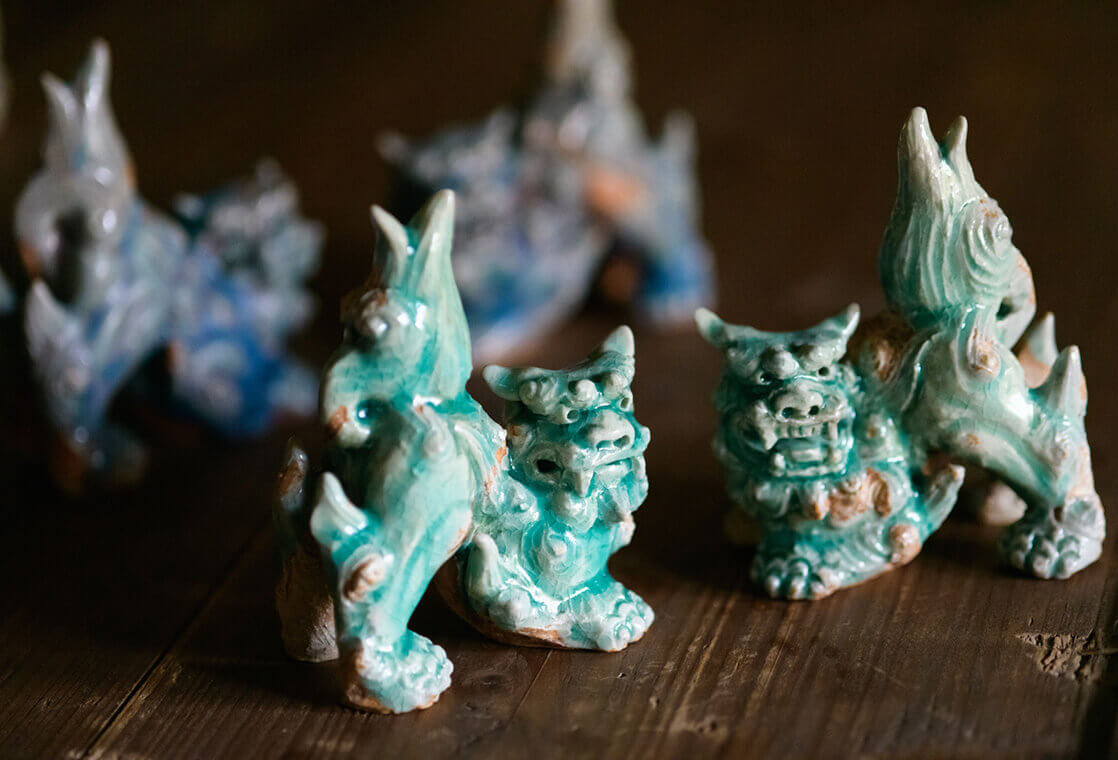 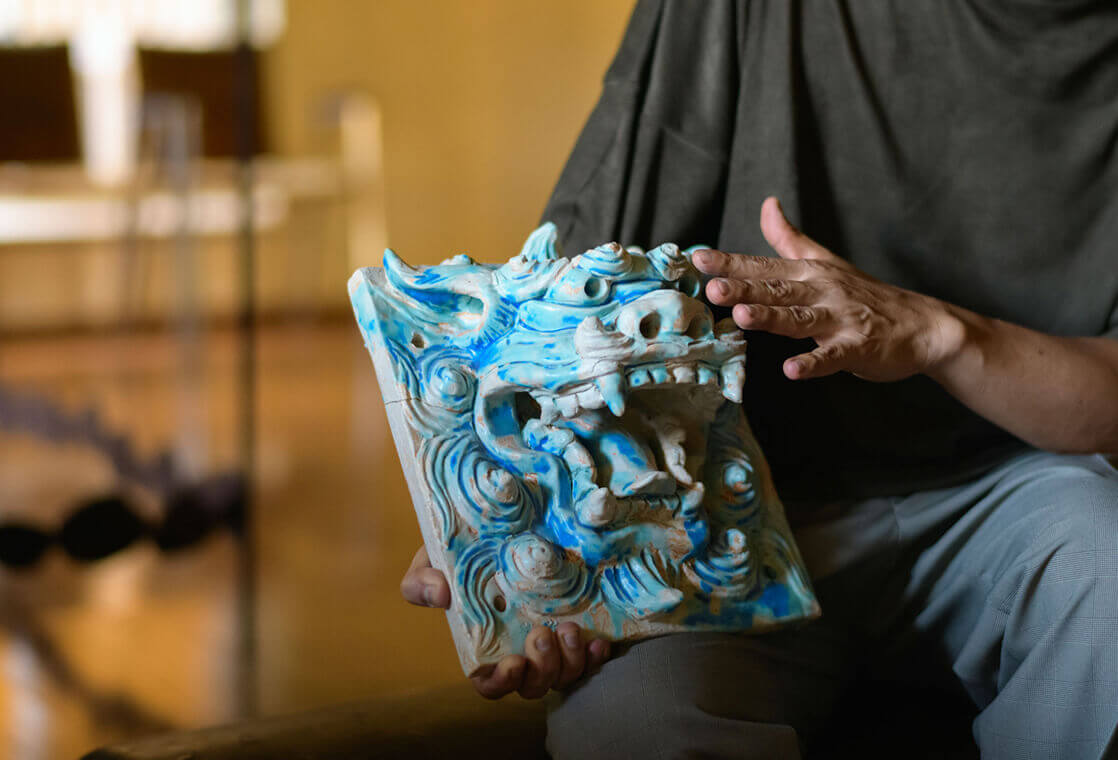 ――I think there are many tourists who would be interested in shisa as an artifact of Okinawan culture.

Joei: In Naha, there is a “Big (ufu) Shisa” that stands more than three meters high in two places – one in front of the Makishi monorail station and one in Tsuboya. We planned this when I was the board chairman of the Tsuboya Ceramics Business Cooperative. When I see tourists taking photos in front of them, I’m really proud of it. It’s said that the face of the shisa starts looking like the shisa-chukuya (the craftsperson who makes the shisa), so if someone says to you, “Yankai, kunu shisa ya nichossa (This shisa looks like you),” then you know you’ve become a full-fledged craftsperson. I’m in my 70s now, but I’m hoping I can still be a shisa-chukuya for another 10 years or so.

Katsushi: I think my father is doing good work. He makes shisa, the guardian deity that protects the family’s peace, and that’s a part of Okinawan culture. There are all sorts of potteries in Okinawa now. There are now more people who are aware of expressing themselves while protecting tradition. If all kinds of people come to Okinawa and become interested in it, we can then start delivering messages to the world from Okinawa. I want the tradition that was born here to continue and keep getting passed on. I hope for all of us, including myself, that even more artists come out who can deliver from and express themselves from Okinawa.

He started studying under his father, Jokei (Shimabukuro Pottery Studio), in 1970. He specializes in creating shisa using traditional techniques and creates little shisa to large-scale shisa and men-shisa, which can be hung on walls. He is a certified traditional craftsperson.